The stables of Leopardi Palace in Recanati have returned to their ancient splendour.

The house that once hosted Teresa Fattorini, the “Silvia” of the famous song and daughter of the coachman of the Leopardi family, muse to the poet, underwent an important restoration. The restoration of the stables, in addition to the safety of the building and the renovation of the original colour of the prospectuses, allowed to recuperate areas that increased the guided tour routes of the Leopardi house adding show rooms and the living area where at the time of the poet, lived the “Tessitora” sung by Giacomo.

Thanks to an accurate colour analysis on traces of the ancient colour recently found and with the help of the company Vimark , specialized in natural materials, it was possible to re-create the colour that once characterized the building. The natural coating, rigorously based on lime and natural pigments was agreed by the Department of Architectural and Landscape Heritage of Marche and proposed again to the property with a philological restoration, which  recalled and used both the techniques and the materials of the early nineteenth century. 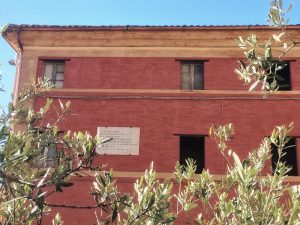 An excellent result for the Leopardi family who, with this important restoration  were able to return to the citizens and visitors the image of square as it was at the time of Giacomo.

The reopening of the “House of Silvia” took place on the anniversary of the birth of the poet last July. An important project of restoration and valorisation  strongly wanted by the Leopardi family. Many played with the Leopardi accounts, so much so that for the restoration of the rooms of ” Silvia”, technicians and workers generously volunteered their work.

Furthermore, the “House of Silvia” has become one of the fundraising points for the reconstruction project FAI of the Oratory della Madonna del Sole, a masterpiece of the XVI century site in Capodacqua, a hamlet of Arquata del Tronto (AP), badly damaged by the earthquake of 24 August 2016. 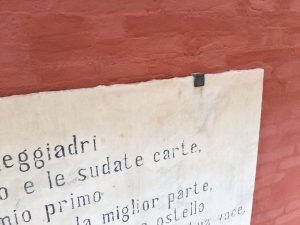