The problem of air pollution in large towns and cities is a major issue when it comes to safeguarding the environment and creating conditions of well-being for the population.

Pollutants are created by human activities (vehicle traffic, heating, industrial production) and they build up in the lower part of the atmosphere in the absence of wind or rainfall. The measures taken by the Administrations in order to contend with this phenomenon have always been passive actions: fewer hours in which heating is permitted, restrictions to the use of vehicles.

Over the past few years, the research conducted by Italcementi-Vimark first led to the creation of light activated substances, i.e. ones able to eliminate many of the pollutants, and then to a range of decorative products for façades capable of reducing pollutants harmful for man’s health.

Use of building materials is the simplest way for distributing light activated substances over vast areas with the utmost efficacy and a minimum extra cost.

Amongst the many organic and inorganic substances in the atmosphere, the main ones responsible for pollution are substantially three: nitrogen oxides (NOx), particulate matter (PM10) and VOC (Volatile Organic Compounds).
Nitrogen dioxide develops in the atmosphere from nitrogen oxide, produced in the first place by use of the fossil fuels that drive vehicle engines for example. According to the World Health Organization, nitrogen dioxide is dangerous for the health: long exposure can impair the lung functions and increase the risk of respiratory pathologies.

“Particulate Matter” is dust suspended in the air whose aerodynamic diameter is less than 10 thousandths of a millimeter. This pollutant is able to penetrate into the respiratory system beyond the larynx. In actual fact, the smaller the particulate, the more dangerous it is. The composition of particulate matter varies, since the particles can have different origins. They can contain sulphates, nitrates, heavy metals or carbonaceous matter.
Volatile Organic Compounds (VOC) is the name of a vast category of at least one thousand substances containing carbon, often characterized by pungent odours. The concentrations of VOC in towns and cities are almost exclusively produced by the combustion processes in motor vehicles, coal-fuelled power stations, incineration pollutants and by evaporating solvents and fuels. Aromatic hydrocarbons are the most dangerous for the health, while the most important of the simple aromatic hydrocarbons is benzene. Benzene inhaled and taken orally, and can cause acute intoxication in view of its carcinogenic properties.

Photocatalysis is a natural phenomenon whereby a substance, known as photocatalyst, modifies the speed at which a chemical reaction takes place through the action of light. By using light energy, photocatalysts cause strongly oxidizing reagents to form. These reagents are then able to decompose certain organic and inorganic substances in the atmosphere through an oxidation process.
Thus photocatalysis is an accelerator of the oxidation process that already exists in nature. It makes the pollutants decompose more rapidly and prevents them from building up.

Photocatalysis has been applied to various different building materials (glass, ceramic, cementitious binders) for over a decade, with a view to achieving a “dirt-resistant” effect. The increasing levels of pollution in cities recently encouraged researchers to study the way photocatalysis able to eliminate the pollutants in the atmosphere.

Laboratory tests to assess the polluting characteristics of products with photocatalytic activity have been conducted with special equipment and equally pioneering test methods.
The test to ascertain the efficacy of photocatalysis against nitrogen oxides (NOx) is conducted by using a chamber with a known volume into which NO2 is blown. This, diluted with the air in the chamber, reaches a previously established polluting concentration.
The chamber contains an NO2 analyzer, a chemiluminescence analyzer, a UV lamp as light energy source and a sample of the tested product.
Different tests at established light intensities are conducted and the concentrations of pollutant in the chamber are measured after the photocatalytic reaction accomplished by the sample. Up to 91% of the NO2 has been eliminated in certain laboratory conditions.
When it comes to particulate matter, the efficiency of these photocatalytic products is evinced when these particles deposit on the surfaces of the products: the organic part is catalyzed, while the carbonaceous metal part remains unaltered. Further laboratory tests have also shown that photocatalytic products are efficacious against VOC. Pigmented organic compounds deposit on the surfaces exposed to the air. These compounds mainly consist of exhaust gas produced by the exhaust pipes of vehicles, pollutants from industrial and domestic activities, moulds, etc. These are the deposits that cause the exterior appearance of buildings to deteriorate.

Photocatalysis acts by eliminating the organic molecules but indirectly, it also reduces the negative effect of the dirtying action caused by simple dust. This latter is able to cling to the surface of the buildings thanks to the organic molecules there. If these are no longer able to build up, the amount of dust is minimal and easy to remove.

According to recent studies and the research into photochemistry applied to building materials conducted over the past few years, Vimark has developed the Ecoaria Line. This line comprises light activated products able to eliminate the organic and inorganic substances that are responsible for air pollution. 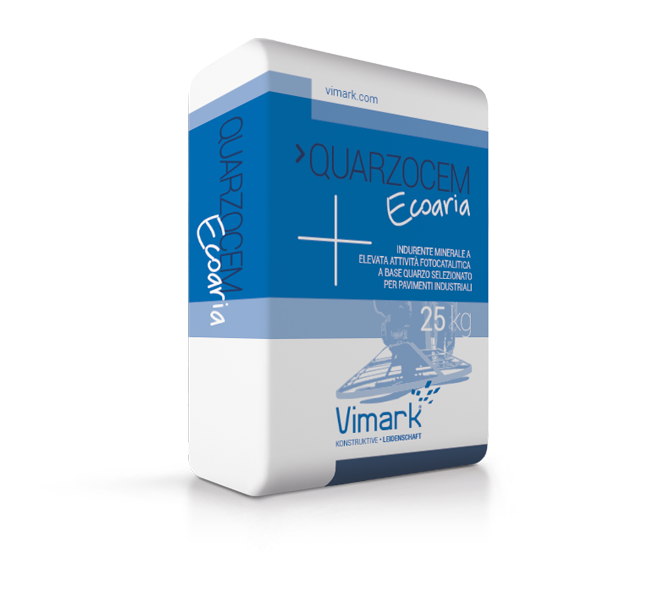